Each year the Federation President is presented with a Quilt and Scrapbook commemorating and documenting her year and chosen theme of “Aggie Moms……Touch the future”.

The Corresponding Secretary of the Federation is tasked with coordinating the quilt project, while the Federation Historian compiles the year in pictures into a beautifully designed scrapbook.

During the 2014-2015 year, Linda Schmidt held the position of Federation President and was presented with her quilt during Parents’ Weekend on Saturday, April 18, 2015. The quilt square shown and donated by the DeWitt-Lavaca Moms’ Club was designed by Sherrice Judd, member and is one of many beautiful squares on Linda’s treasured quilt.

The entire quilt is made up of squares contributed and donated by many local clubs, Federation officers, friends, and family of the President. It was quilted by Lauri Bechtel ‘84 and Kathy Perkins ‘78 of the Collin County Aggie Mom’s Club.

Fran Marintsch, 2014-2015 Federation Historian presented Linda with her scrapbook during the Federation meeting on Saturday, August 29, 2015. 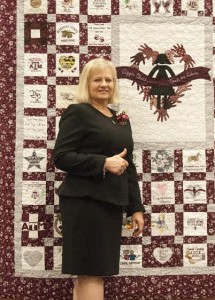 The Aggie Br"AGs" link above shows the latest information on our students attending Texas A&M University.

Have any questions or feedback for the Dewitt Lavaca Aggie Moms'? Just send an email to dewittlavacamoms@aggienetwork.com

Join our facebook page to stay updated with the latest information from the Dewitt-Lavaca Aggie Moms' Club: https://www.facebook.com/DewittLavacaAggieMoms